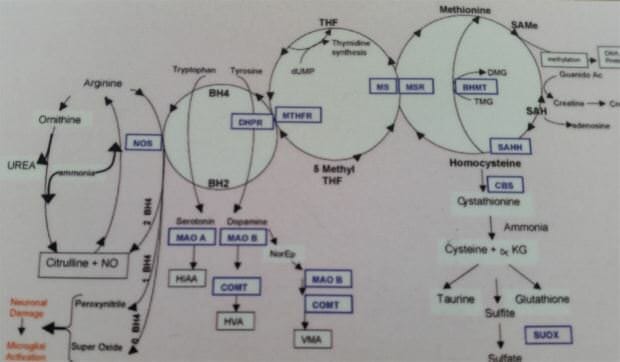 I am seeing an increasing number of people in my naturopathic clinic who have got themselves tested for the MTHFR genetic variants but are then at a loss to know what to do with that information (that goes for doing broader genetic testing too). As a naturopath, this worries me because in some cases they are putting the cart before the horse or focussing on one small part of a very big picture. Let me explain.

Putting the MTHFR gene into perspective for your health

The human genome was only finally sequenced earlier this century. That’s just a blink of an eye in the context of human evolution. While this new information is undoubtedly helpful to our understanding of health, let’s not ignore everything else we have learned about the effects of nutrition, our environment and lifestyle on our health. It would be naïve to just focus on your genetics.

Everyone has genetic variations (otherwise we’d all be identical). Having a genetic makeup which is different to others is what makes you unique. It’s what you were born with. Sometimes these variations (or SNPs pronounced “snips”) can be to your advantage and other times they can cause problems (when certain circumstances combine). There is no one-size-fits-all and there are pros and cons.

How your genes actually work for you will largely be determined by your diet, lifestyle and environment.

Since the sequencing of the genome, there has been an explosion of research surrounding the function of our genes, how they vary from one person to the next and how they influence our health. One gene which is receiving a lot of attention (at least for the moment) is the gene for MTHFR and the role that plays in methylation. Now, while this may be a very important gene (more on that later) it is important to remember it is only one gene out of what is estimated to be up to 25,000 human genes and we are virtually only on the first page of what will be a big book on our genes and our health. There is still a huge amount to discover, but we can still work with what we know now (and what we knew before genetics came along).

So, what is methylation and why would a naturopath care?

Without wanting to turn this into a biochemistry lecture, methylation is a chemical process which happens in the cells of the body whereby a methyl group (one carbon atom and three hydrogens) gets added to or removed from another molecule to make a new molecule. (That’s it for the biochemistry, I promise). Suffice to say it happens a lot and the act of methylation influences many, many activities in our body which is why there has been such an interest in it in research circles.

Methylation is involved in over 400 chemical reactions in our body. Just a few of these include:

Methylation dysregulation may possibly play a part in anaemia, cardiovascular disease, mental health, detoxification illnesses, our ability to cope with stress, cognitive decline, cancer and healthy aging. No wonder this naturopath cares about it.

Methylation can be too active or underactive. And to complicate things a bit further, this can vary from one part of the body to another so it is all about getting the balance right.

So, what is MTHFR?

Methylenetetrahydrofolate reductase (MTHFR to its friends) is an enzyme which plays a critical role in the whole methylation pathway (but it is only one of 5 key enzymes involved in methylation). Given that methylation has been identified as a very important function in humans, it’s not surprising that there has been a focus on MTHFR (as well as the other relevant genes that make those enzymes).

There have been some 70+ variants identified in the gene responsible for making MTHFR. However, research has currently honed in on a couple of variants which seem to be key players. These are the C677T and A1298C SNPs. Without getting into genetics in more detail, different combinations of these variants can have differing effects on your health (again dependant on diet, lifestyle and environment).

The key points to remember about MTHFR, methylation and your genes

Confused? Don’t worry….that’s what we’re here for. As naturopaths, it’s our job to put the pieces of your puzzle together for you so that you are not overwhelmed. We take your nutrition, lifestyle and environment into account and not just your genes (and especially not just one gene).

2 thoughts on “What you need to know about MTHFR, methylation and your health”